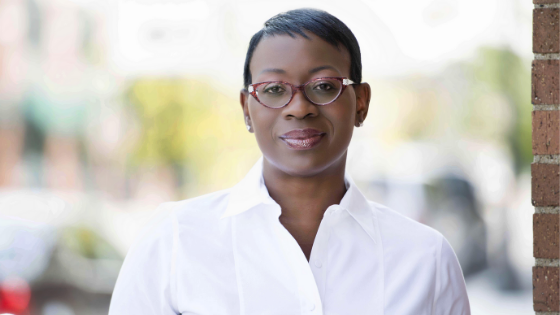 Our BlackHer Shero of the Week is Nina Turner, president of Our Revolution and former Ohio State Senator. Senator Turner was recently appointed co-chair of the Bernie Sanders 2020 presidential campaign.

A long-time advocate for progressive ideals and values, Senator Turner has been recognized by The Root as one of the Top 100 most influential African Americans in the US. In 2017, she was recognized as a member of the Politico Playbook Power List of 18 to watch in 2018.  She has appeared on numerous national television and radio shows, such as “Meet the Press,” “The Bill Maher Show,” Comedy Central’s “The President Show,” “Democracy Now,” the “Rickey Smiley Morning Show,” “The Breakfast Club,” “The Bill Press Show” and “Thom Hartmann Radio.” Turner is also a political commentator on CNN, appearing frequently on “The State of the Union with Jake Tapper” and “CNN Tonight with Don Lemon.”

Jocelyn: Senator Turner, it is such a pleasure to connect with you.  I loved having the opportunity to hear you speak at the She the People Summit.  You are one of the most important Black women in politics. Congratulations, on your new role as co-chair of Senator Sanders’ 2020 presidential campaign!  Can you tell us a little about your history? How did you become you?!

Senator Turner: I’m a Cleveland Girl.  I was born and raised in Ohio.  I’m the oldest of seven children.  My parents were very working class and divorced when I was young.  So, for most of my life, I lived with my mom, although my father paid child support when he was gainfully employed.

It’s hard to be a single mom holding it down financially and emotionally.  And it’s hard on the children. As the oldest, I became an extension of my mother.  I got my first job at fourteen to help supplement the family income.

I went around the block a couple of times to get my college degree.  It was hard because so much stems from home. Your caretakers must give to you and guide you to college but that’s hard when you are a first-generation college student. That’s why education means so much to me.

That’s where my righteous indignation comes from.  Safety nets matter. The fact is that we don’t all “run the race at the same pace.”

When I first heard Senator Sanders speak, it was magnetic because he spoke to my lived experience.  Senator Sanders addressed the fact that so many of us are bumping up against a rigged system. It makes you feel less than.  Like Ice Cube used to say, “My skin is my sin.”

Jocelyn: Senator Turner, you’re serving as a co-chair of the 2020 Presidential Campaign.  What does a co-chair do?

Senator Turner: I am privileged to join US Rep. Ro Khanna (D-CA), San Juan, Puerto Rico Mayor Carmen Yulín Cruz, and Ben & Jerry’s co-founder Ben Cohen as a co-chair of Senator Sanders’ campaign.  As co-chairs, we set the tone and help determine the policy priorities of the campaign.  We also advise and serve as representatives of the campaign.

Jocelyn: We talk a lot at BlackHer about the extreme wealth inequality facing Black women.  As you know, single Black women are REALLY struggling financially. We have median wealth of $200.  This is untenable and impacts every area of our lives. What are the policy priorities that the campaign will pursue to get us out of this mess?

Also, our maternal mortality rates are off the charts.  Black women are three and a half times more likely to die from complications from pregnancy than white women. The research is clear: to solve our maternal mortality crisis, we need to address the fact that health care is a human right that is not being recognized as one under the current system.

Free college for all is also a Black woman’s issue.  So many of us are working one, two, or three jobs just to get by.  We don’t have money to get a college degree. And many of who have college degrees are saddled with student loan debt.  For example, 28 percent of African American students are forced to drop out of college after one year due to costs. We also want to fully fund HBCUs.

How can we look our children in the eyes and say, “Even if you do everything right, I still can’t send you to college?”

We must fix this.  Education is one of the things that helps to break the intergenerational wealth gap.  The more you learn, the more you earn.

As recently as last week, Black women and other women of color booed the Senator when he didn’t clearly answer questions about how he would address racial inequality.  What can/is the campaign going to do to address this disconnect?

Senator Turner: Our campaign is listening in a deeper way today than we did in 2016.  Senator Sanders is a leading progressive voice in this country and has been for his entire life. His message is like a song that rings out sweet notes of justice and equality for all people. The question we now face is, how can we change the melody — not the song — to sound sweetly for all people? Our goal on this campaign is to change the melody so our message speaks to Black women’s souls.

Jocelyn: I love that.  I hope that the campaign will do more to center Black women and, as you say, “speak to our souls.”  Again, I think there is a lot of overlap between the campaign’s policy priorities and our values and I hope identity politics don’t distract us from that fact.

Senator Turner, who are your BlackHer Sheroes?

Senator Turner: My grandma.  She is the shero of my three-bone story that I share when I speak.  She was the rock of our family. My mother had a hard time even when she was alive.  My grandmother was my constant. She means so much to me and taught me the meaning of respect and discipline.  She was the one who always told me that I was beautiful.

I also admire Harriet Tubman.  She said, “If you’re going with me, you’re going all the way.  There is no turning back.” I love that. Because it wasn’t about her. It was about the entirety of the group and what they could accomplish together. The same is true of Sen. Sanders’ message and this campaign; it’s about all of us. I try to live my life in that same way.

Sojourner Truth is another shero because she stood in front of white men and white women in 1851 in Akron, Ohio and said, “Ain’t I a woman?”  She told them, “I’m doing all the same things that everyone else does and nobody laid out a coat for me!”  She reminds me that Black women must work one hundred times harder than everyone else and no one has mercy over our souls even though we’re asked to show mercy for everyone else. Regardless of our success, we must continually prove our value.  Even though I’ve held the title City Councilwoman, the title of State Senator and now the title of National Co-Chair for a presidential campaign, as a Black woman I still feel this burden of having to be better.

I love Shirley Chisholm because she said, “I don’t care what anyone says, I’m running for president.”  She did that!

Finally, I admire Mother Jones and Fannie Lou Hamer because they didn’t have formal political titles, but they still got the work done. I always say, “titles are good but having a purpose is better.”  Mother Jones and Fannie Lou Hamer were regular people who had a conscience and the will to fight. These are the types of women that I’m fighting for.

Jocelyn: Amen.  It’s time for the Miracle Question.  You go to sleep tonight and wake up tomorrow and it’s May 2020 and the miracle has occurred for Black women.  What happened?

Senator Turner: The world shook.  There’s been a total shift for humanity.  Because, as Anna J. Cooper said, “when and where I enter, in the quiet, undisputed dignity of my womanhood, without violence and without suing or special patronage, then and there the whole Negro race enters with me.”